The Light in the Tunnel 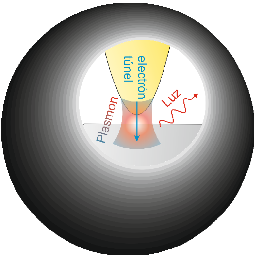 Researchers from the Universidad Autónoma de Madrid, IMDEA Nanociencia and IFIMAC have developed a new method for the fabrication and characterization of atomic-sized photonic cavities, by exploiting the mechano-quantum tunnel effect. This discovery may be fundamental for the understanding and design of new, nanometric size, opto-electronic devices which will be key for the development of new technologies based on quantum properties, such as sensors or quantum computers.

Photonic cavities are an essential part of many modern optical devices, from a laser pointer to a microwave oven. Just as we can store water in a tank and create standing waves on the surface of the water, we can confine light in a photonic resonator whose walls are strongly reflective. Just as water surface waves depend on the geometry of the tank (shape, depth), specific optical modes can be created in a photonic cavity whose properties (colour and spatial distribution of intensity) can be tuned by changing the dimensions of the cavity. When the size of the cavity is very small, much smaller than the wavelength of the light confining it (nano-cavity in the case of visible light), an intensification effect of the light is produced that is so strong that it influences the electrons on the walls of the cavity. A mixture between photons and electrons is then produced, giving rise to hybrid modes between light and matter known as plasmons. Plasmons in optical nano-cavities are extremely important for many applications such as chemical sensors that allow the detection of individual molecules or the manufacture of nanolasers that could operate with hardly any electrical current consumption. However, the characterisation of these plasmonic modes is generally very complex, because the tiny size of the cavities makes it extremely difficult to access them by external signals.

On the other hand, the tunnel effect is one of the most characteristic, mysterious and best documented effects of Quantum Mechanics. In a tunnel process, a particle (e.g. an electron) can pass through a narrow barrier (the space that separates two metals at nanometric distances) despite not having enough energy to overcome it. It is as if we could pass from one side to the other of the Great Wall of China without having to jump over it. Incredible as it may seem, particles from the quantum world can do this under certain conditions. In most of these processes, the energy of the particle before and after the process is the same. However, in a small fraction of these events, the particle can give up some of its energy, for example, by generating light, which is known as the inelastic tunnel process. Although it is well known that the properties of the light emitted in the inelastic tunnel process between two metals depend on the plasmonic modes that exist in the cavity, it also depends strongly on the energy distribution of the particles performing the tunnel process. Until now, it had been impossible to distinguish unequivocally between these two effects and therefore extract the information on the plasmonic modes from the analysis of the light emitted by the tunnel effect.

In an article published this week in the prestigious journal Nature Communications, researchers from the Universidad Autónoma de Madrid, IMDEA Nanociencia and IFIMAC have developed a method to solve this problem by simultaneously determining the energy distribution of the tunnelling electrons and the light emitted in a Scanning Tunnel Microscope. This effort has allowed them to exploit the tunnelling effect to create optical resonators of atomic dimensions and to study their optical properties, unravelling for the first time the contributions due to the energy of the tunnelling particles from the effects originated by the plasmonic modes in the cavity. This work proposes a novel methodology for the characterization of light-matter interaction at atomic size, and may have important technological implications for the development of chemical sensors of single molecules, new sources of single or interlaced photons or nanolasers that are active at extremely low pumping powers.

Contact
Dr Roberto Otero
This email address is being protected from spambots. You need JavaScript enabled to view it.

Prof. Francisco J. García-Vidal
This email address is being protected from spambots. You need JavaScript enabled to view it.

IMDEA Nanociencia Outreach Office
This email address is being protected from spambots. You need JavaScript enabled to view it.
+34 912998712